ORIGIN
The ancient origin of the town is attested by the numerous buildings in the area; according to the nuraghi density map, made by prof. Giovanni Lilliu, Genoni is among the areas with a density greater than 0.60 nuraghi per km², most of which can still be visited.

The elevated position of the Santu Antine hill, which Genoni is built on, has certainly attracted populations to settle in this area since ancient times.

Punic, Romans and most likely also the Vandals reached and then chose to live both in the Giara and on the Santu Antine hill; as the ruins found from the different eras allow us to hypothesize.

The walls of a Punic fortress on the hill, and, always at the top of the hill, the ruins of a Roman church dedicated to St. Helena and Constantine.

The town reached large dimensions, probably because of its position out of the main transit ways.

This territory, though not very extensive, shows a remarkable variety of geomorphological landscapes; due to a prolonged geological and paleogeographic evolution that has witnessed many important tectonic, volcanic, sedimentary and morphogenetic events that can be traced back about 300 million years ago, or at the end of the Paleozoic Era, but with a higher incidence in the last 25 million years or so.
This pleasant landscape is dominated by the characteristic isolated truncated cone block of Mount Santu Antine (591 m a.s.l.). It too, like the Giara, was carved in Miocene marl and bears at the top a residual limb of the Pliocene basalt.

The town of Genoni lies on the south-east side of this hill, in a beautiful and little known position, the one and the other together forming a picturesque landscape combination that is now a classic on the island and strongly characterizing this territory.

The territory has a long human presence attested by a considerable number of nuraghi, finds and a sacred well.

The name Giara, Sa Jara, probably derives from the Latin glarea (gravel), with reference to the widespread stoniness that characterizes the plateau surface.

The Pliocene basalt plateau of the Giara (500-600 m a.s.l.) surrounded by 11 municipalities, spreads to about 45 square kilometres of territory.

With its remarkable landscape and naturalistic value, the Giara has been included among the nine national parks established by Regional Law No. 31 of 1989

The Giara horse museum was created with the aim of enhancing and preserving two characterizing aspects of our territory:

The Giara horse make known this equine breed, unique in the world, which still lives on the Giara basaltic plateau
reveal the uses and customs of a territory rich in traditions linked, in part, to this important animal.
The museum, set up inside an ancient and typical Genonese house faithfully restored, is divided into two sections, one relating to the Giara horse and horse in general and another purely ethnographic, dedicated to the local peasant culture.

Ex-Monastery of the Friars Minor of the Observance

The creation of the Convent of Genoni Archdiocese of Arborea – Oristano which, as in the cases of Gadoni and Fonni, pushed the Friars Minor to open new foundations in their jurisdiction.

The decision to found the Convent dates back to December 12, 1609, even though it was indicated as the host town of Laconi. The figure of Fr. Pietro Locci was important to make Genoni prefer to Laconi: he also convinced the Marquis of Laconi in this decision, while the consent of the competent Ecclesiastical Authority was given on 20 July 1638.
The official mandate to P. Pietro Locci to found the new Convent of S. Sebastiano in Genoni dates back to 28 October 1638. The articles of association are dated 14 October 1638.

The two ancient churches of S. Sebastiano Martire and SS. Sepulcher (so called because adjacent to the cemetery) were the chosen place to build the Convent; the aforementioned churches were united. A third church was built, in honor of S. Sebastiano Martire, which gave the name and title to the Convent. The inhabitants of Genoni participated in its construction for free, with one working day each, as established by the chapters of understanding between the Friars Minor of Sardinia and the People and the Community of Genoni. The conditions of the friars towards the community were:
a stable and permanent presence of a Franciscan community, made up of no less than 12 friars, whose main task is pastoral in nature
a stable preacher throughout the year for the preaching of Lent, Advent and any other Christian holiday of the Parish
a Grammar teacher for the students of Genoni and in the future open a study of Rhetoric and Philosophy
Collaboration and participation with the community in every pastoral and spiritual commitment in the country
At the beginning the relationship between the religious and the town was fruitful; the Convent also owned lands, so that the Friars would apply the fruits deriving from the Masses. Its cultural role within the community was also important; in fact, in 1778 a list of volumes was compiled in the Convent Library, giving a total of 413 volumes divided into sections: Sacred Scripture, Moral Theology, Mystical Theology, Philosophy, History, Hagiography, Preaching, Liturgy, Franciscanism, Mariology, Theology Sacramental, Classical, Grammar and Rhetoric Literature.

The parish church dedicated to Santa Barbara was originally a secondary church dedicated to the Madonna delle Grazie. Its primitive structures are of the XII century and the oldest part is constituted by the stone cross brought to light during the restoration works of 1986. Since the origins the shape of the church was enlarged with a large nave that made it a Latin cross and with a vaulted wooden truss.

Over the years, several restoration works have been necessary: ​​in particular, the intervention of 1808 with which the current marble high altar was replaced, which replaced the wooden altar of 1654. In 1923 a new chapel dedicated to San Salvatore da Horta. In 1986, during major restoration works, the polished marble flooring was restored and in 2008 work was done on the interior in order to eliminate conspicuous humidity phenomena from the walls.

The celebrations in honor of Santa Barbara patron saint of Genoni are celebrated on December 4th. 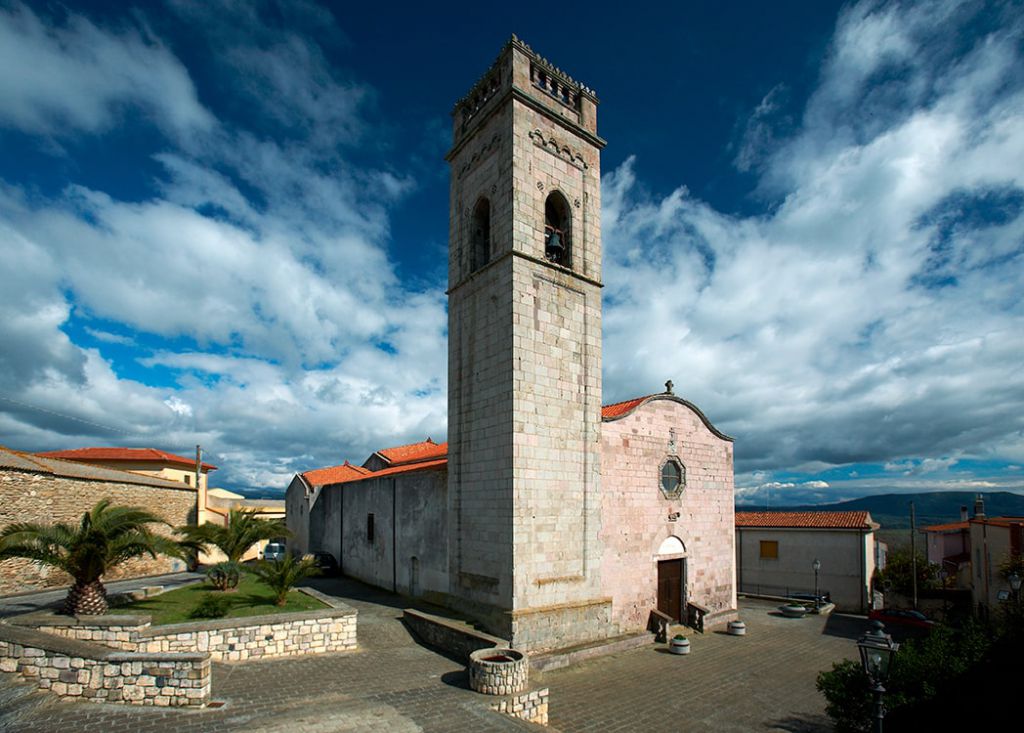 Sardinia presents, in different areas of its territory, precious fragments of its geological history.

In the territory of Genoni, in the eighties, a very important geological and paleontological site was discovered.

Today’s tropical scenery can help us imagine what Duidduru might have been like in the Miocene; the stratigraphy of the site and the wealth of fossils present are some elements that make the site interesting from a scientific point of view. 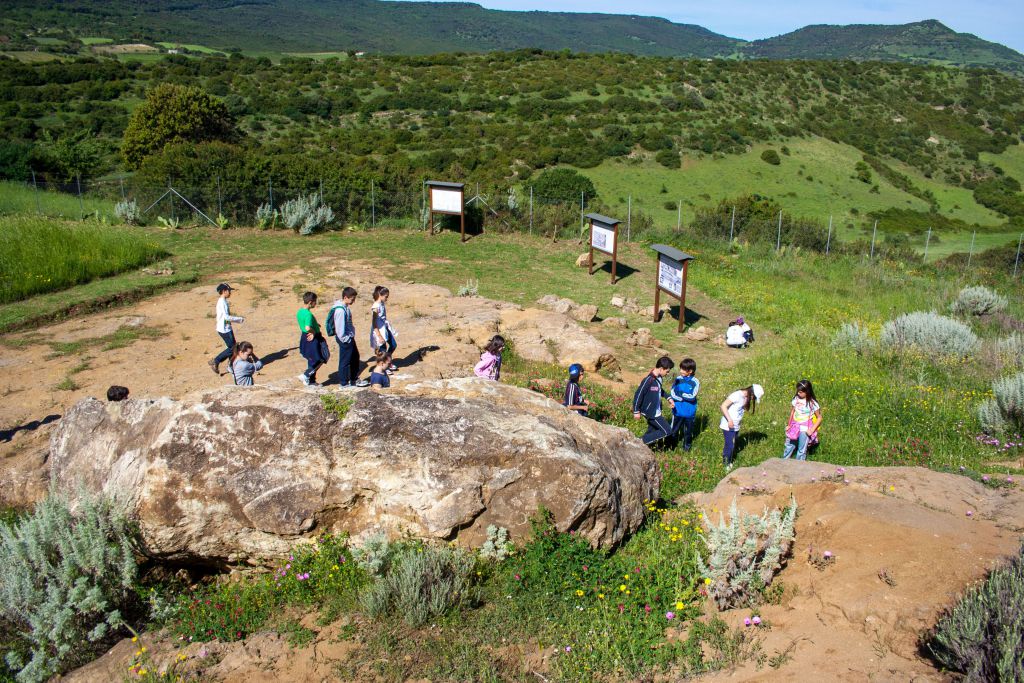 The Giara park, Giara di Gesturi or Sa Jara Manna, (500–600 m asl), falls on 4 Municipalities: Genoni, Gesturi, Setzu and Tuili. Spread over 44 sq km, about 15 of which belong to the Municipality of Genoni. The name Giara (Sa Jara, Pranu ‘and Jara) seems to derive from the Latin glarea (gravel), with reference to the widespread stonyness that characterizes its surface.

La Giara is a basaltic plateau with characteristic features, a huge natural fortress in the center of Sardinia that preserves a flora rich in endemisms and a fairytale environment. It is known above all for the presence of the Giara horses, for the spring blooms and for the lakes known as Paulis.

Steep cliffs of dark lava rock, from which rushing waterfalls sometimes fall, surround this vast plateau, whose surprisingly flat top is embellished by the suggestive stagnant water of the paulis (Pauli Tramatzu, Pauli Maiori, etc.), with their splendid, white spring blooms of water buttercups. The steep slopes of the Giara, luxuriant with verdant woods and Mediterranean scrub, are modeled in the tender marly marine sediments of the Miocene, sometimes cut by steep seasonal water channels. On these slopes, frequent springs (funtanas or mitzas) often originate from the infiltration of rainwater along the diaclase cross-section that crosses the summit basaltic rock. 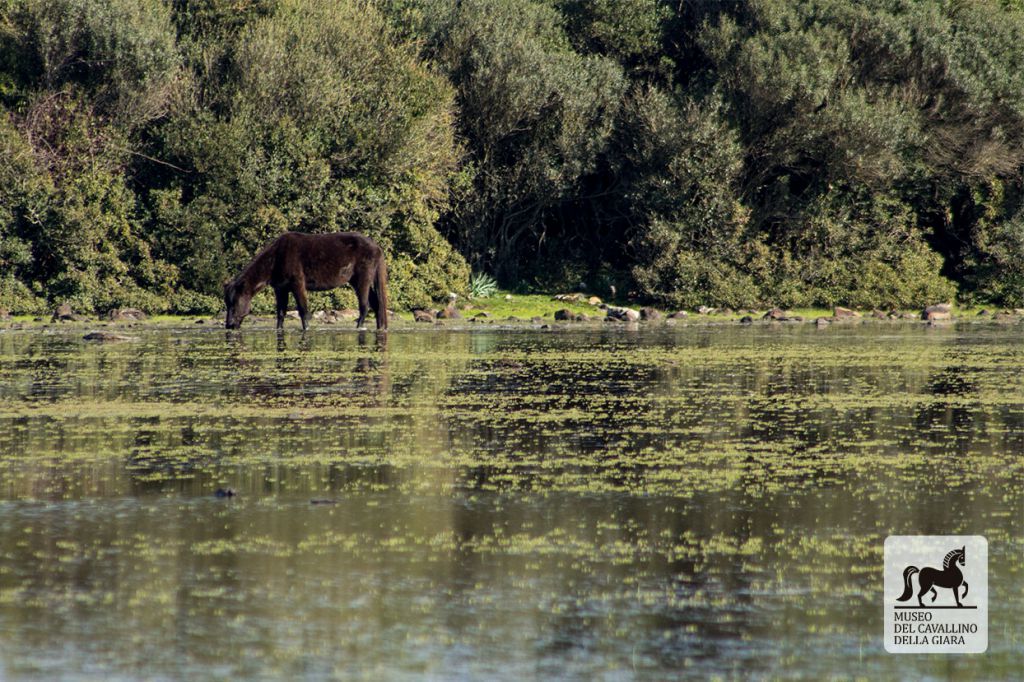 The archaeological site of Bruncu Suergiu is located in the Giara Park, within the Agris area in the municipal area of ​​Genoni.
The archaeological site is hidden by vegetation and difficult to reach. Traces of ancient roads, a large settlement with production plants, fortification structures characterize the site. In addition to the huge amount of material, a large terrace, partly natural and partly built by man in ancient times, overlooks the Campidano offering a breathtaking view. Only the view repays the long and difficult walk. The archaeological area, placed under protection by the Ministry of Cultural Heritage, is approximately 11 hectares.